ARLINGTON, Va. – It has been nearly 36 years since John Riggins produced one of the greatest clutch runs in football history with a 43-yard touchdown rumble on fourth and inches against Miami – kids, check out that stiff-arm on YouTube! — that propelled Washington to victory in Super Bowl XVII.

Now “The Diesel” is still running … with a different purpose.

The Super Bowl XVII MVP is revved up about the still-persistent quest by retired players from his era to increase their pensions, which pale when compared to more recent retirees and current players.

“It appears the NFLPA and their constituents are only worried about themselves, and, ‘Sorry, guys, just die, will you please? Go away,’ ” Riggins, 69, told USA TODAY Sports during a recent group interview that included his wife, Lisa Marie, and several former teammates. “That’s kind of the feeling you get.”

As another Super Bowl looms, with yet another appearance by Tom Brady and Bill Belichick on tap, there’s also a “Groundhog Day” effect when it comes to aging ex-players looking for a bigger piece of the NFL pie. They’ve been at it for decades, in one form or another, frustrated that those who played before the major sea change in the NFL’s system occurred in 1993 – when liberalized free-agency and a salary cap were instituted – are in a markedly lower class for benefits. This, while the most robust sports league in the land continues to grow, with revenues exceeding $14 billion per year.

Compare the pension of, say, Hall of Fame guard Joe DeLamielleure, around $30,000 per year, with the $220,000 maximum for similarly vested retirees of Major League Baseball or the NBA who played in the 1970s, and the concerns of the ex-players resonate. 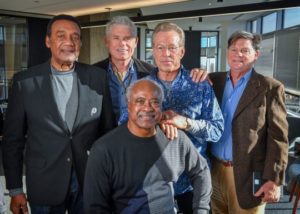 But here’s the big problem for the pre-’93ers: Like the last time and multiple times before, they won’t have a seat at the bargaining table when the NFL and NFLPA negotiate to extend the current collective bargaining agreement that expires after the 2020 season.

So, among efforts by others (such as Hall of Fame legend Eric Dickerson), a reformulated approach now flows through a non-profit entity, Fairness for Athletes in Retirement (FAIR). Headed by attorney Lisa Marie Riggins, FAIR has embarked on a campaign aimed to educate the public and current players in advance of those next CBA talks.

The group is raising operating funds through online donations (pensionparity.com) and has private donor events in the works in several NFL markets. It’s all essentially an appeal to altruism, bolstered by the hope that public pressure, in addition to engaging the NFLPA, will lead to significant increases for roughly 4,000 former players in the pre-’93 class.

“One of the important things in appealing to the union and the current players is that they’ve held themselves out now as social justice warriors,” Lisa Marie Riggins said. “So I think the timing is perfect to make our case. I say to them, ‘Look inside your very own house,’ because there’s some justice that can be done.”

Of course, current players and NFLPA leadership have a different view. When the last CBA was struck in 2011, active players contributed more than any group of players ever to the pre-’93 cause – largely through the $620 million “Legacy Fund” that was funded jointly with NFL owners.

Yet the current players are challenged by a lingering perception that, with salaries that dwarf those of previous generations, they lack empathy for the pioneers.

“Active players have increased pensions and benefits for former players under every collective bargaining agreement,” former Falcons linebacker Dewey McClain, a member of the NFLPA’s executive board, noted in an e-mail to USA TODAY Sports. “People overlook the fact that active players not only pay for benefits, but that today’s players pay a higher percentage of their salaries toward pension than in any other era. Former players are most effective when we unite to have NFL owners contribute to the pensions of former players like we did in 2011.”

Lisa Marie Riggins allows that the NFLPA doesn’t have a fiduciary duty or legal duty to their cause. Yet she contends there is a “moral duty,” as roughly 140 players per year from the pre-’93 class die – and there is no shortage of hardship cases of former players dealing with financial and physical challenges.

“I see it first-hand,” said Mark Moseley, 70, who in 1982 became the only pure kicker in NFL history named the league’s MVP. He now heads the Washington Redskins Alumni Association. “I know that they need help … so that they don’t have to get on their hands and knees and beg. That’s just not right for guys who played and gave their hearts.”

Even so, this is hardly a business environment where it’s typical for retirees who were, for example, autoworkers, technical engineers or teachers, to go back to former employees to negotiate new pensions, years later. If FAIR succeeds, and more power to them, it would buck the trend that has existed for over a decade as traditional pensions are frozen or slashed, if they exist at all, often replaced by 401(k)s or other retirement-saving vehicles.

According to Lisa Marie Riggins, the pre-’93 class has received just one cost-of-living increase in 38 years – which came with the aforementioned “Legacy Fund.” According to the NFL, the fund boosted the monthly pension for a 10-year veteran who played during the 1970s, for example, from $165 per month to $1,810. Other benefits include programs that address assisted living, joint replacement, spine treatment and discount prescriptions.

Yet listen to former players and they will tell you that without lifetime medical coverage and other resources, it is far from enough. And they still feel disenfranchised by the dividing line that is 1993.

“The other leagues – hockey, baseball, basketball – they all realize that the pioneers deserve the same thing their current guys get as far as the retirement (benefit) goes,” John Riggins said. “I’d say that’s a pretty small chip when you think about it.”

Karen Friedman, executive vice president and policy director of the Pension Rights Center, has heard similar themes before. The Washington, D.C.-based group once advocated with Johnny Unitas for the same purpose.

“If the NFL is making record profits,” Friedman told USA TODAY Sports, “there’s no reason why it shouldn’t want to raise the pensions of those who helped build the league.”

If so, perhaps the model was exhibited with the “Legacy Fund,” with both owners and the players’ union contributing as an aside to their labor negotiations – albeit without the pre-’93ers having a seat at the table. Remember how the late Gene Upshaw, a Hall of Fame tackle who ascended to head the NFLPA, infuriated former players years ago by declaring that he represented current players – and not former players.

DeMaurice Smith, who has often talked of supporting the pioneers since first elected as executive director of the NFLPA in 2009, inherited that animosity as part of his job. While the intensity hasn’t risen to the level that it did with his predecessor, he probably won’t win any popularity contests with the pre-’93 players, either.

Which fuels irony. Many of the pre-’93 players participated in the four player strikes during the ’70s and ’80s – which ultimately led to the class-action lawsuit settled with the 1993 CBA and system overhaul that brought about free agency.

Riggins sees it like this: “We robbed the bank and they spent the money.”